Finland enjoys a relatively mild climate thanks to the Atlantic Ocean and the Gulf Stream. This means a fairly mild summer and an extremely cold and dry winter, especially in February with very low temperatures. It is worth noting that the Polar night runs from late November to mid-January, and the midnight sun from mid-May to July. And for snow lovers, the best time to visit Finland is from November to April, when there's no shortage of the stuff, Cross-country skiing can be practised for most of the year.

January has the harshest weather in the year.

The coldest month of the winter season is January, although there are regional variations in the amount of snow and fog. The country's highest temperatures are in the south and south-west. However, they rarely drop below zero (average -1°C in Helsinki and Masku). And even if there is significant snow or rainfall, there is still a substantial cloud cover. If you're a fan, the Levi resort, located 90 minutes from the capital, is the best place for cross-country skiing - the national sport of Finland. It has 140 miles of cross-country trails in a lovely rustic setting. Lapland, though, is extremely cold at this time of year and requires specialist gear (it can drop to -10°C degrees in Rovaniemi). So, unless you are desperate to see the northern lights, this region is best avoided at this time of year. The centre is a little less cold but is still uncomfortable and foggy (average -4°C in Jyvaskyla).

February: the country is still in the grip of winter at this time of year

There is still snow in the southern part of the country and the low temperatures and fog are ever-present. The centre is also very cloudy and cold, but there is plenty of skiing here on the slopes of the Himos resort, which run through frozen forests and lakes. In the south-west, the sun does put in a little more of an appearance, but that doesn't keep the weather from being bitterly cold. Lapland in February is quite similar to January and can even drop as low as -20°C in some places. Again, special gear is required to withstand the low temperatures.

March: this is the most pleasant winter month

March is the best time for a winter visit to Lapland. It is a little warmer (-5°C on average compared to -8°C in January in Rovaniemi), there is the most snow and the day is twice as long as in January, with eight hours of daylight. With the right cold-weather gear, the far north is within reach. It's worth noting that the further north you go, the fewer villages, homes and vegetation there are - it really does feel like being on the edge of the world. The capital and the south-west, in and around Masku, start to warm up a little and temperatures can climb a degree or two above zero. Snow is also rarer, as are clouds. There is still more fog in the centre though, which is still very cold and snowy.

April: the end of the winter season

As spring does not begin until May, wintry conditions, possibly snow, can still prevail into April, albeit it's a few degrees warmer. This means that temperatures in the south and south-west are clearly back into positive figures again with seven degrees at the hottest time of day and a lot more sunshine. However, there is still the odd occasional shower. This makes it a good time to visit Helsinki to enjoy the city, either on foot or by bike. A warm coat is a must. When it's very cold, head to the sauna, a national institution. When the temperatures start to become milder, head to Toolo, a delightful mix of town and country. The centre also starts to warm up a bit at this time, but there is still a fair amount of mist and rainfall. Avoid Lapland at this time of year, which is extremely foggy, cold and prone to snow (except for cross-country skiers who flock to the region until mid-May). Top tip: the end of April marks the arrival of spring and with it one of Europe's oldest celebrations: Walpurgis Night. Celebrated on the night of 30 April to 1 May, bonfires are lit primarily in the main towns and cities.

Spring happens in stages in Finland as there is still snow in the north of the country until mid-May, while temperatures become milder in the south. Temperatures can reach 14 degrees in Helsinki and Masku when the sun comes out, while the rains and clouds increasingly fade away, replaced by the sun. The centre is a little wetter but the sun is still shining most of the time. Only Lapland is still quite prone to rainfall, although, with an average of eight degrees in Rovaniemi, it's a place you can visit without feeling the cold too much. Enjoy the last days of cross-country skiing (better earlier in the month before the snows melt) in Pallas-Yllastunturi National Park, crossing the Lapland tundra and taiga in the heart of wild forests.

June: Lapland is the place to go

The end of May/beginning of June is a great time to visit Lapland because this is when the midnight sun starts in Finland's northernmost city Utsjoki. This phenomenon (which lasts until the end of July) produces a translucent light that constantly lights up the sky. During this period, some 10,000 reindeer settle on the banks of the Tana River on the Norwegian shore. It's a striking spectacle. In the south of the country, the temperature is around 15°C and there is sunshine for most of the month. The centre, on the other hand, is a little rainier and cloudier so it's not the best time to be here. It is worth noting that the sun never sets throughout the country in June. Note: the midsummer solstice is celebrated on Friday night into Saturday between June 20 and 26 depending on the calendar. As well as featuring some of the country's biggest bonfires, it is also a public holiday so don't count on shops being open.

July: the hottest month of the year, so it is probably one of the best times to visit Finland

Lapland is at its hottest in July, with the greatest number of dry days per month. However, we are talking about the Finnish summer here, so it's only around 20°C at the hottest time of day. There can still be rainfall though, as humidity is very high at this time of year. Remember to pack a good mosquito repellent as there are plenty of them at this time of year in Lapland. Helsinki is also quite humid, but the city is bathed in beautiful sunshine and enjoys summery temperatures like the rest of the country. For a slightly drier experience, opt for the south-west, with a little rain and just as much sunshine. Avoid the centre though where rain and clouds go hand in hand. Top tip: for swimming at this time of year, the best bet is the southern lakes as they are warmer than their northern counterparts (18-20°C in the south compared to 16-18°C in the north).

August: the country starts to cool down a little

Even though temperatures drop in August, the weather is fairly favourable with increasing but reasonable rainfall, apart from a few areas. This means Helsinki alternates between glorious sunshine and rain and has a mild climate, with an average temperature of 18°C. Like the previous month, the south-west gets slightly less rainfall and enjoys similar temperatures to its neighbour. Lapland is still a good place to visit at this time of year, with an average temperature of 14°C in Rovaniemi. Meanwhile, the picture remains the same in the centre - fairly cloudy and rainy, with a few dry days.

In September, 'ruska' (autumn) begins in Lapland. The countryside is blanketed in orangey-red hues, with temperatures nudging 10°C. In the south of the country, the summer season is in its last month, with warm spells (average of 15°C in Helsinki and Masku), though it tends to be cloudier. The centre is still as misty, but the rains ease off somewhat. There are not many dry days this month.

Autumn arrives in southern Finland a little later than its northern counterpart. The region is quite rainy and rather foggy at this time, as is Lapland, where wintry weather is already setting in. The centre doesn't fare much better with cold (5°C in Jyvaskyla) and cloudy weather. In a nutshell, the south of Finland has the warmest weather in October, averaging eight degrees.

In the far north of Lapland, in Utsjoki, the phenomenon of polar nights begins, the reverse of the midnight sun. The sun disappears entirely for more than seven weeks from late November to early January so it's not really the best time to visit Finland. In general, the amount of daylight begins to decrease in the country (from five to seven hours of the day depending on the region). Winter temperatures have gained a foothold and range from two to five degrees centigrade, with a fairly high cloud cover. Lapland then begins its period of extreme cold with temperatures dropping below zero. Christmas is a magical time in Finland, making December an ideal month to visit.

The only reason Lapland is famous at this time is that it is the holiday season and many tourists stay in Rovaniemi to see 'Santa's home'. Temperatures are freezing and the area experiences fairly heavy snowfall in December. Elsewhere, the cold and the large cloud cover make the country a less appealing place to visit, unless it's to ski, of course. 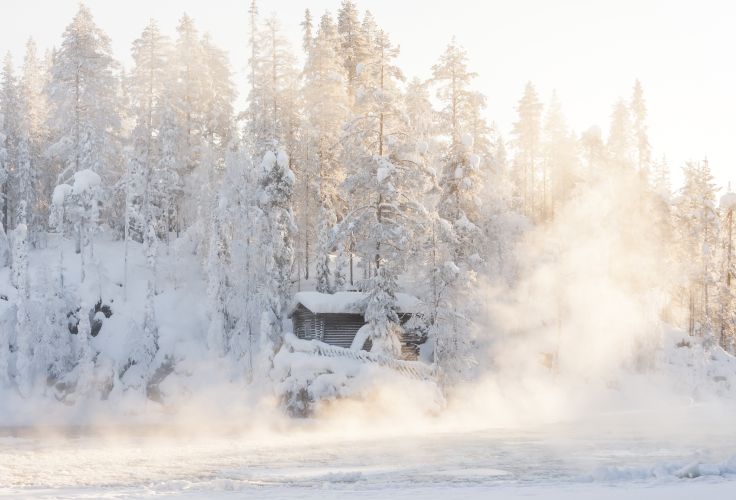 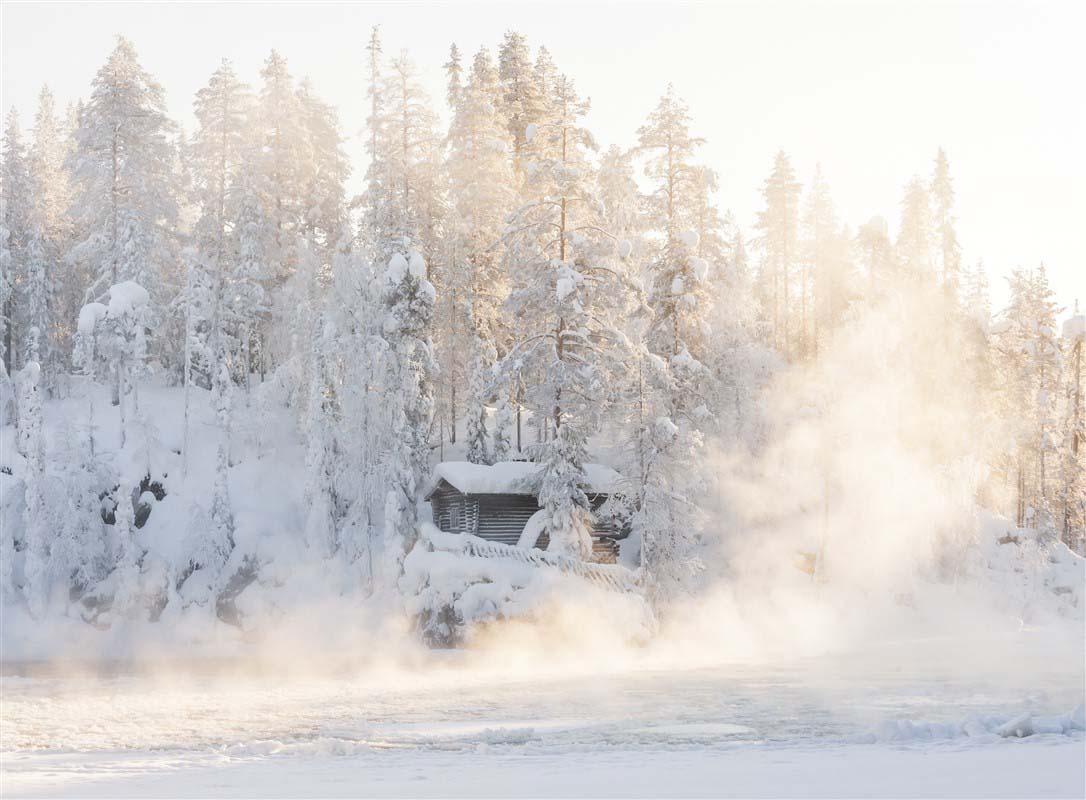 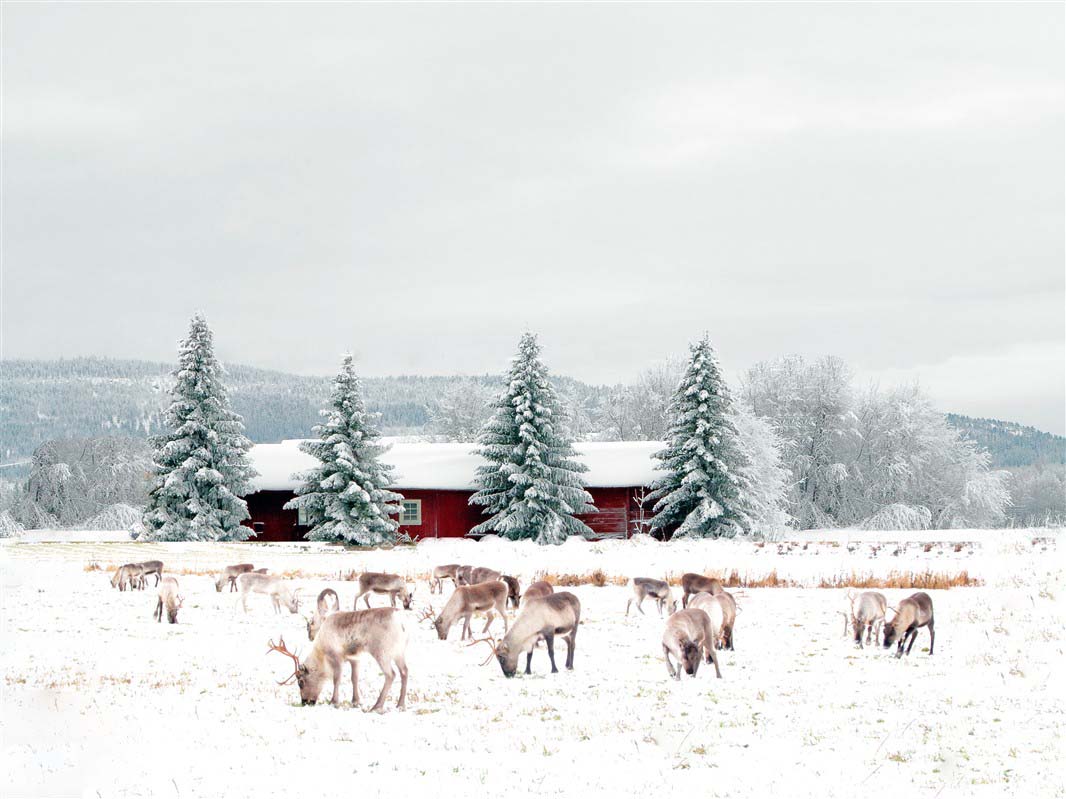 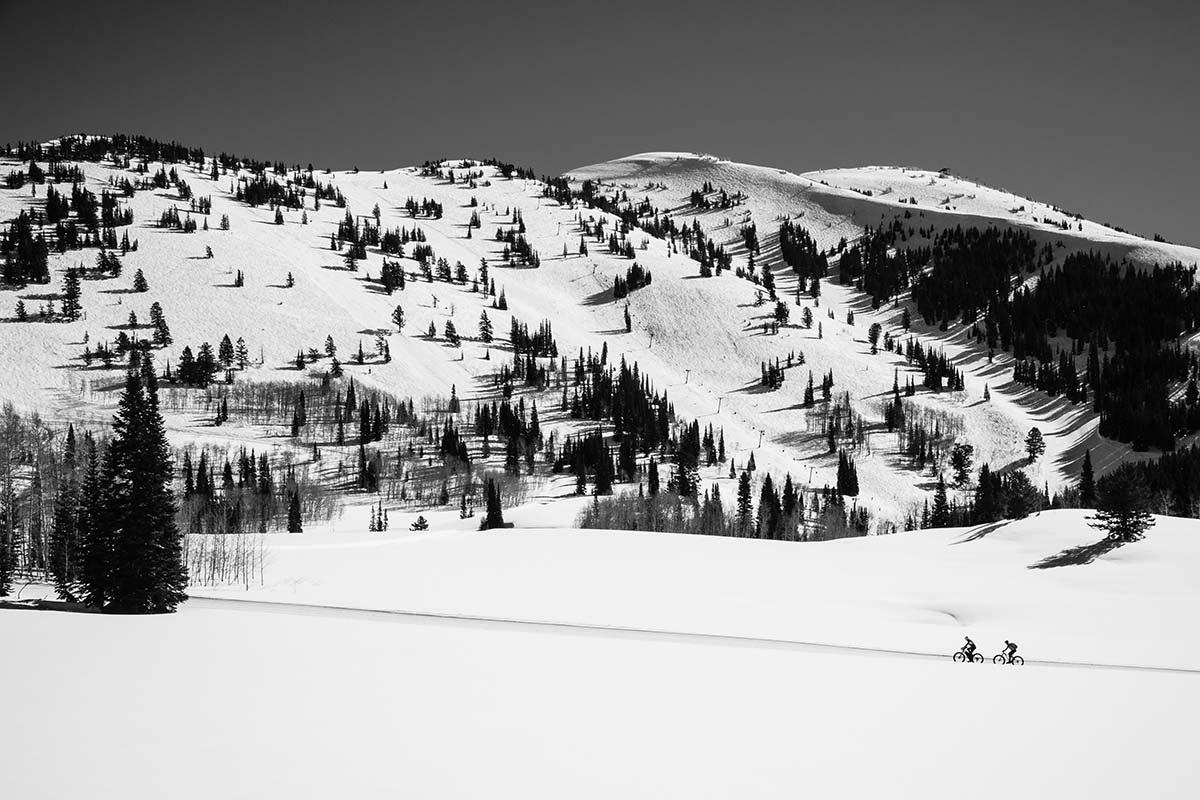 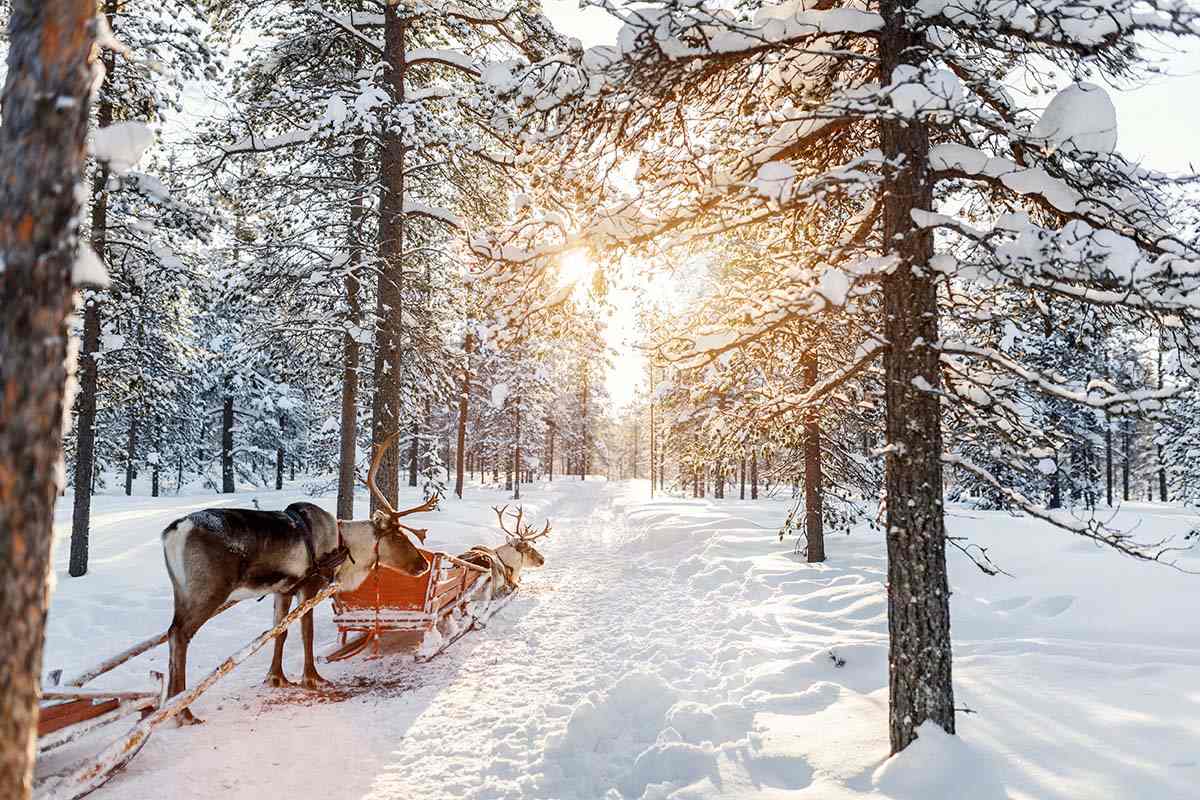 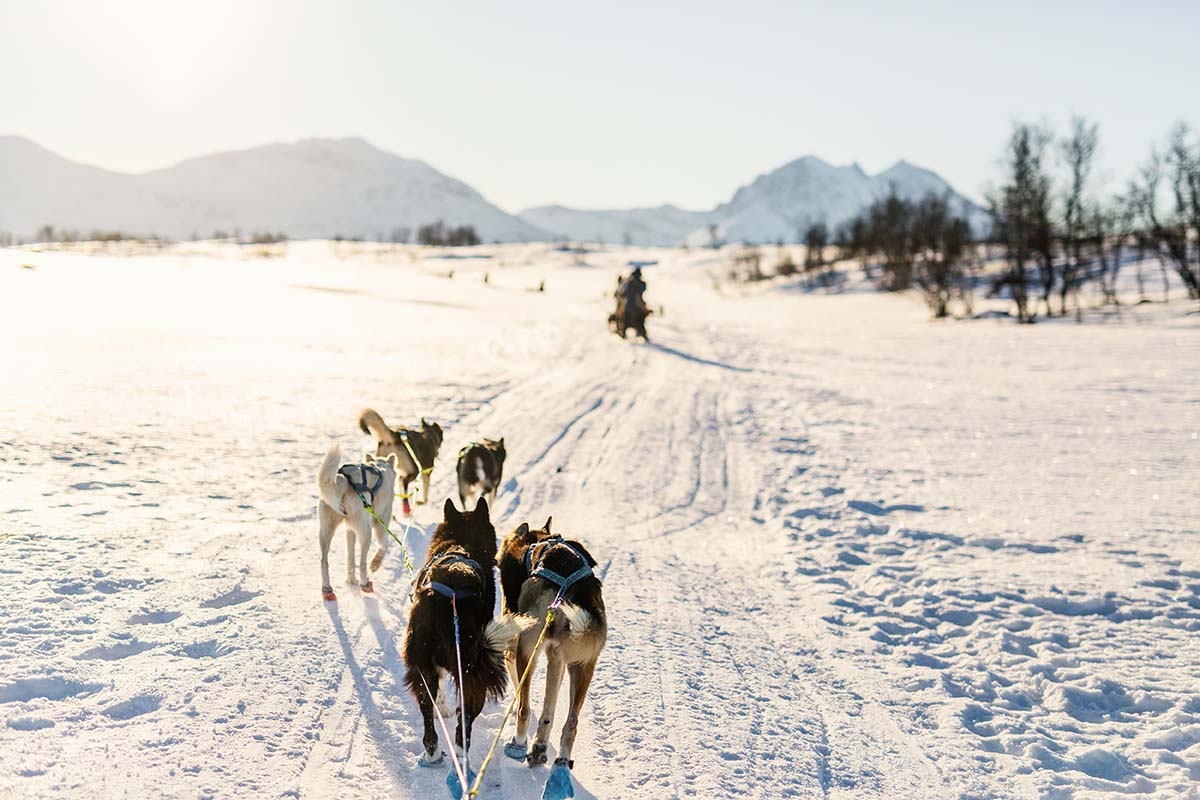 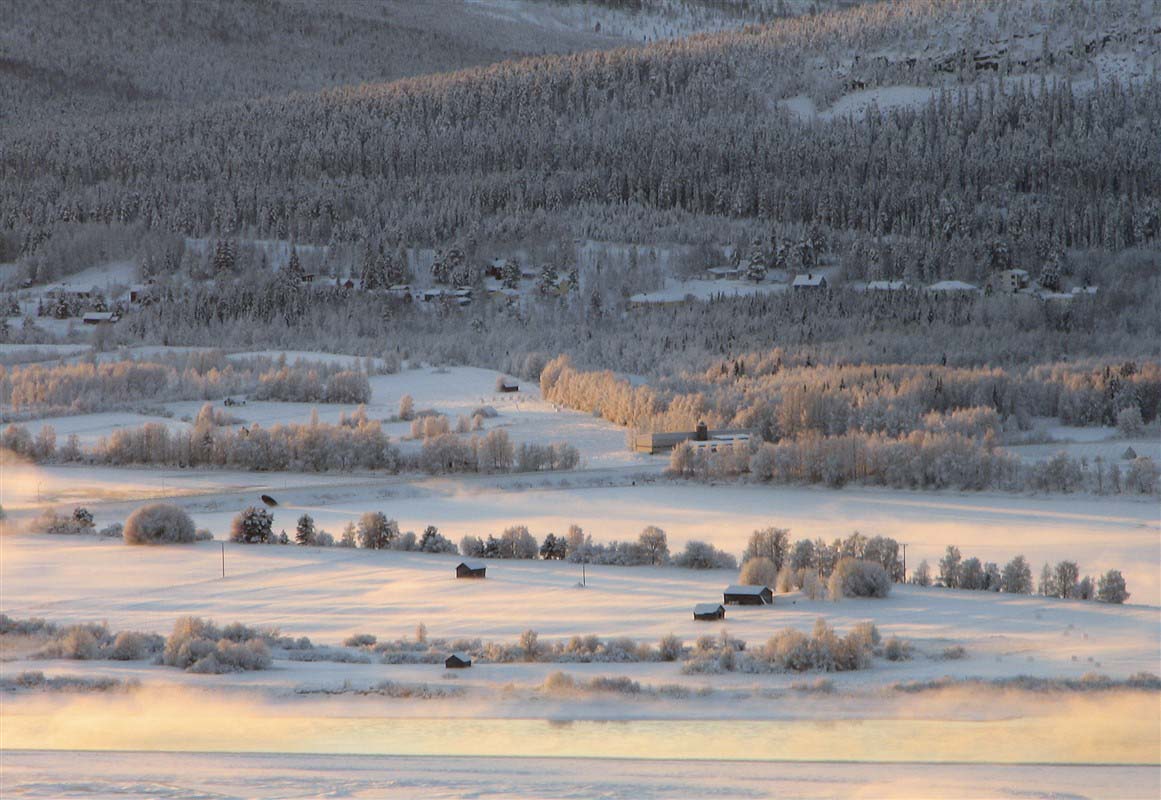 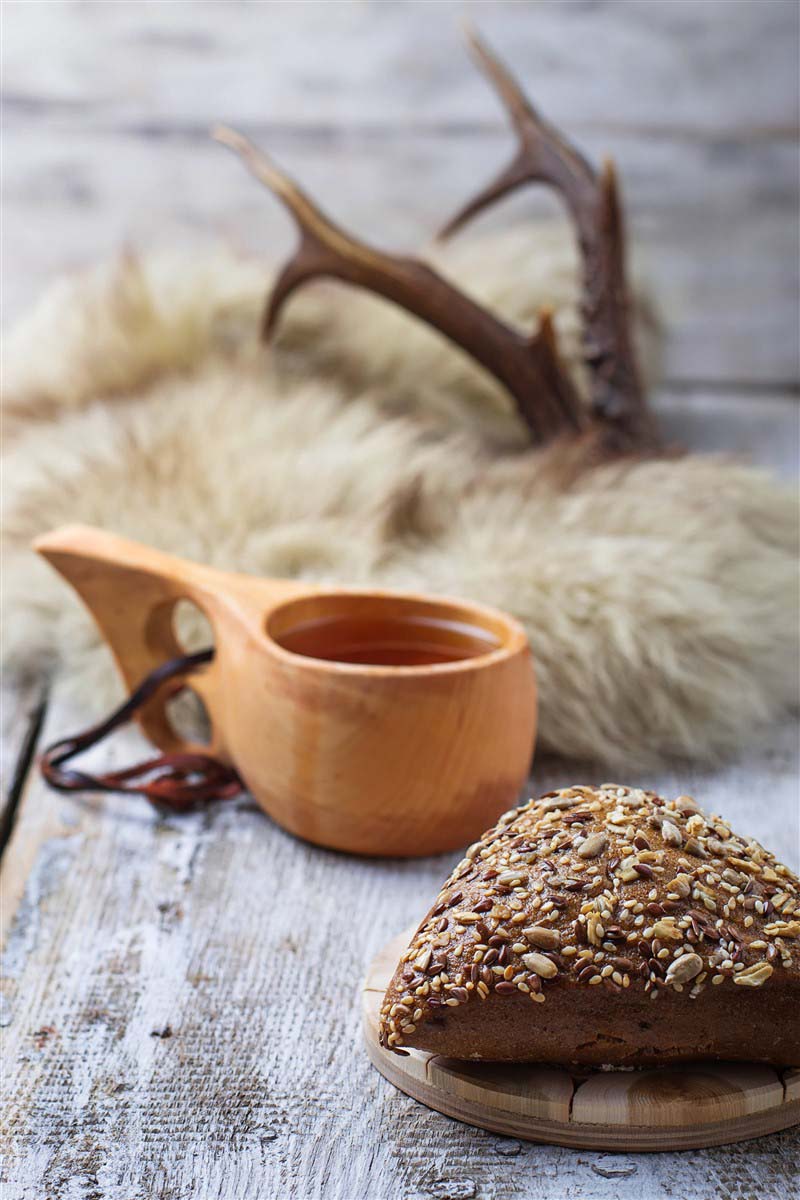 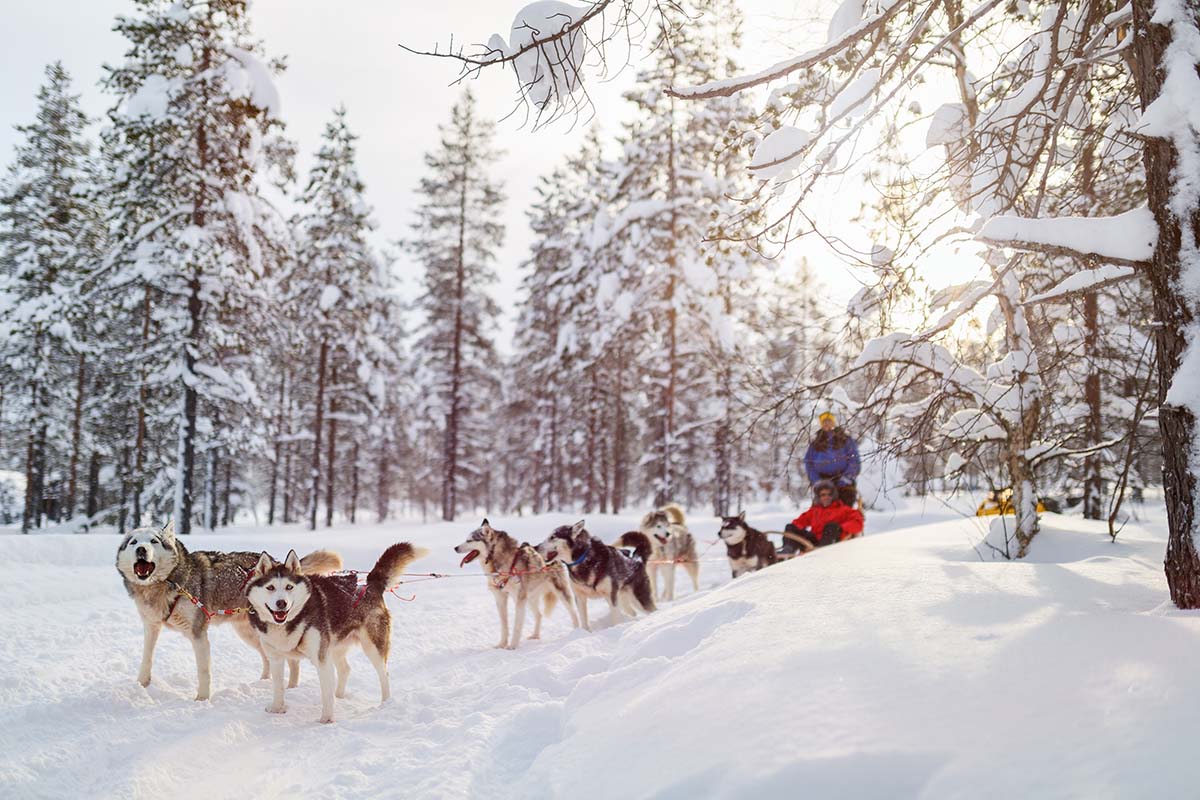 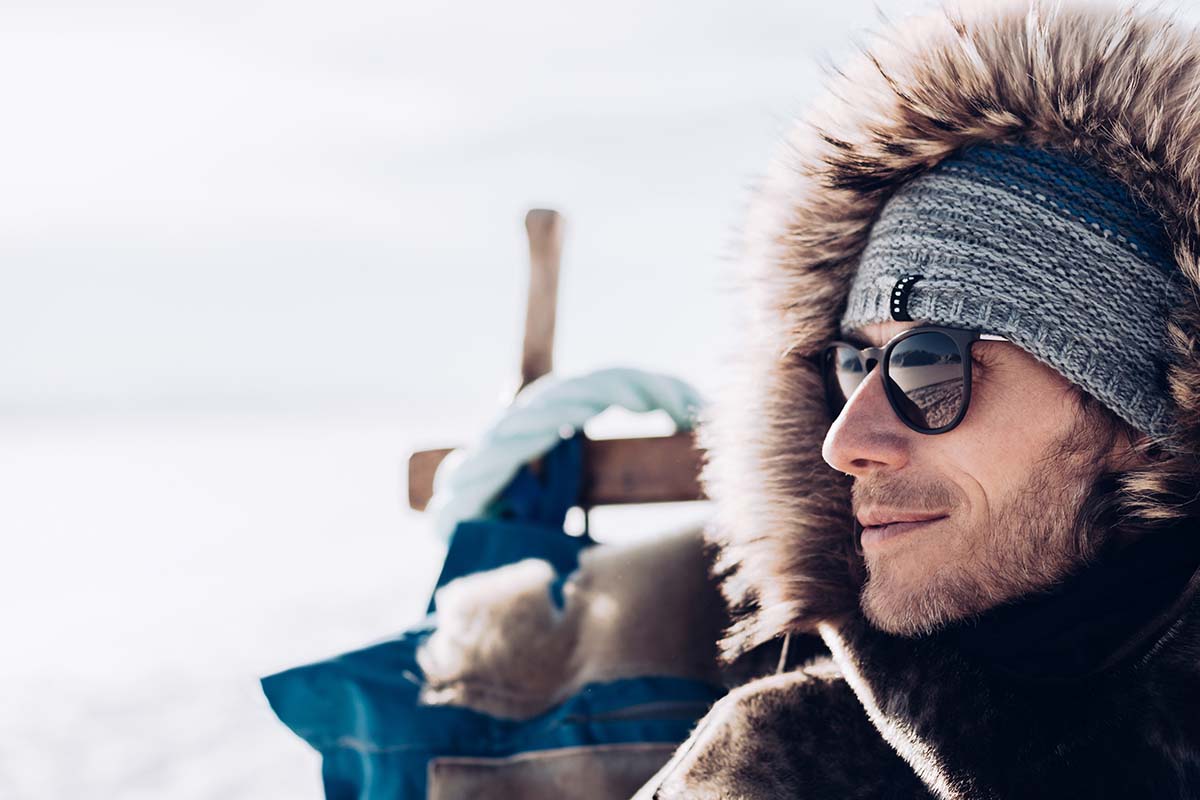