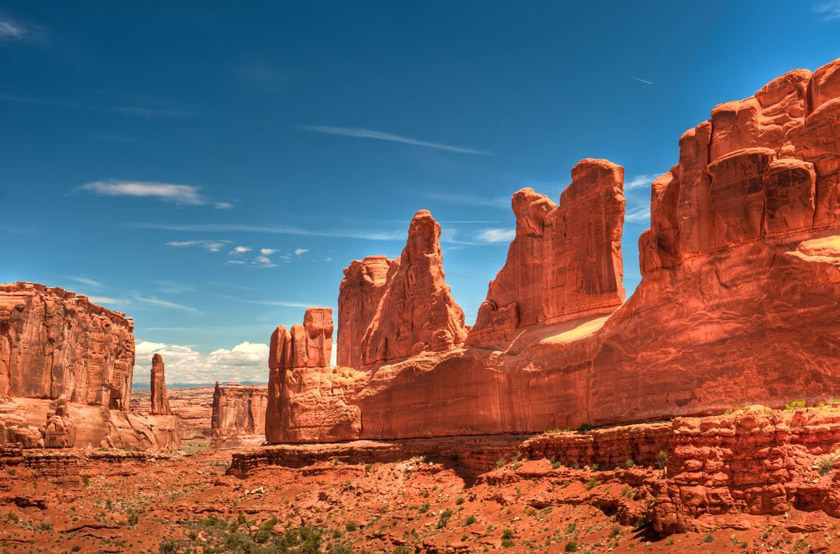 A USA road trip is a real once in a lifetime holiday experience for many - our guest blogger included. In part four Tony Herbert's American Road Trip blog series, he discovers eastern Utah's Arches National Park.

Today we have a hectic schedule thanks to a packed itinerary: make the 3-hour drive to Moab, check in to the Red Cliffs Lodge, grab some lunch and visit Arches, another national park.

We leave early, hoping to get to the Red Cliffs Lodge around midday, and on our way drive through a delightfully named village, Mexican Hat. We wonder why it's called Mexican Hat, and the question is soon answered as we pass a famous rock that looks like a Mexican wearing what is undoubtedly a Mexican sombrero.

We arrive at Red Cliffs Lodge, a rustic hotel situated 14 miles from Moab along the Colorado River. It's made up of a multitude of individual cabins, all situated by the river and under massive rock cliffs. But it's the drive into Moab that is unexpectedly spectacular, with rich red terracotta sandstone cliffs rising high on either side, with the Colorado River running alongside the winding road.

Onto Arches. One thing to say: it's not all about arches. Much of what you'll see publicity-wise understandably shows one of the dramatic arches - but the one most commonly featured is actually quite tricky to get to, as are some of the others. The park also has the most amazing red sandstone rock formations which are, in some ways, more exciting than those we saw in Monument Valley. The rocks have been eroded, over the course of millions of years, into the most extraordinary and beautiful shapes - the 'gossiping ladies' rock is very accurate, and the famous balancing rock looks as though it might topple off it's perch sometime well before the next ice age; tomorrow, perhaps.