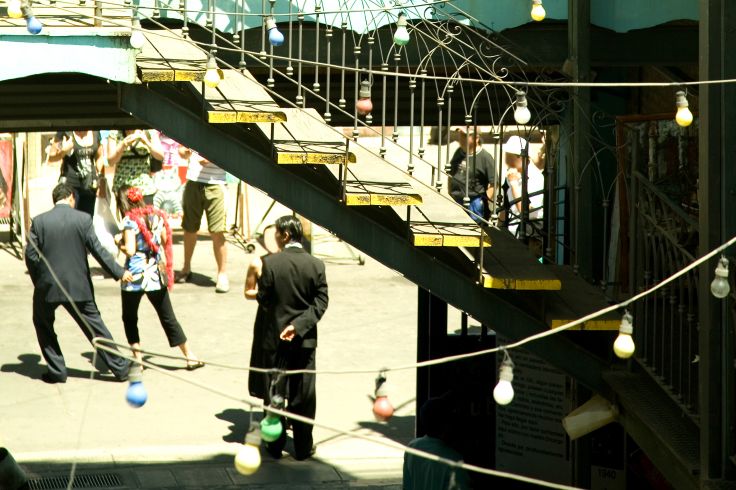 The journey starts in Buenos Aires, as was the case for so many Argentinians. Spend two days immersed in this most attractive city. Despite being as languid and melancholic as a tango, Buenos Aires is also vibrant and cosmopolitan. Buenos Aires is a South American capital with a European appearance, with its wide Paris-like boulevards. Described as the 'Capital of Feelings' by Spanish writer Manuel Vazquez Montalban, it has the most psychoanalysts in the world. With its 13 million inhabitants, it seems to stretch all the way to the Pampas across its 38 neighbourhoods. San Telmo, a district full of retro cafes; La Boca,
a bit rough around the edges and home of the tango; trendy Palermo; chic Recoleta; and the most recently renovated neighbourhood in the city, Puerto Madero, a symbol of Argentine nightlife where lofts with large balconies overlook trendy bars.
Patagonia. ThePerito Moreno glacier is a dazzling, pure beauty. It vibrates, it rumbles, it creaks, it cracks – and ice blocks break into the lake to become instant icebergs. The landscape is immeasurable - this is one of the world's most beautiful glaciers, with its blue-tinted walls and changing reflections.
Just over an hour's drive from Buenos Aires, you'll arrive in the village of San Antonio on the Camino Real, an ancient royal road linking the capital to Peru in the heart of the Pampas, immense, fertile plains stretching from Buenos Aires province to Cordoba province. The landscape is a sparsely-populated, treeless, grassy plain - perfect for a nice retreat away from the hustle and bustle.

As the name suggests, Legado Mitico - legendary legacy - evokes great Argentinian figures, from Eva Peron to tango singer/songwriter Carlos Gardel. Designed as a cabinet of curiosities, the eleven rooms are decorated with furniture and objects bargain-hunted from just about anywhere. With a fireside library, Chesterfield armchairs, large, waxed wooden staircase, breakfast lounge and leafy patio, the hotel resonates with Palermo Soho, the chic and trendy district with showrooms and art galleries, craft shops selling items from the Argentinian Altiplano, New York wine bars, tapas and Mendoza wines: this is the part of Buenos Aires that shimmers and shines from dawn until dusk.
Eolo Relais & Chateaux - the perfect Patagonia. This ranch is just as you'd image it: lost in the middle of nowhere. In the boundless plains, with a 360° view of the never-ending horizon - where on a good day you can see Torres del Paine in the distance. In the wooden living room and the six suites adorned with understated, elegant furnishings, the large windows look out onto the turquoise expanse of Argentino Lake at the bottom of the valley. The restaurant is wonderful, with food created by one of Argentina's best chefs. What's the best way to get to the Perito Moreno?
La Bamba de Areco, Las Pampas in luxury. San Antonio de Areco, which is in the middle of Las Pampas, is a ranch that has been transformed into a guest house to celebrate the golden era of the gaucho, the South American cowboy. On arrival, a huge wrought iron gate opens out onto an alley lined with secular plane trees that give you a glimpse of a red ochre residence in the distance. Think fireplaces, saddlery leathers, waxed wood, beautiful linen and wool. In the rooms, there's no television or telephone, nothing that disturbs the peace and the change of scenery. At teatime, the cimarron tea begins to swirl and at dinner, the aroma of smoke grilled 'asado' (Argentinian barbecue) meat wafts in the air. It's a step back in time.

Transfer and two nights' accommodation at the Legado Mitico in Palermo Soho, a hotel that is a reflection of the neighbourhood: chic and trendy.
Things to see and do Take the time to savour the sweetness of life, sitting down with a cortado (espresso with added milk) and a medialuna pastry at Cafe Tortoni, with its green marble-print curtains and red leather seats, stroll around the Plaza de Mayo, visit Palacio Barolo, which was built between 1919 and 1923 as a tribute to Dante's Divine Comedy - bargain hunt in the antique shops of Plaza Dorrego in San Telmo - delve into the past at the Museo Historico Nacional - visit the Cathedral Nuestra Senora del Buen Aire, Pope Francis's church when he was Archbishop of Buenos Aires - walk around the docks of Puerto Madero, the meeting place of the city's gilded youth and wonder at the dancers of the Tango, described as a 'sad thought expressed in dance', in the milonga dance clubs.
Option Dinner and show in a Tango cabaret.

Transfer to the airport to catch a flight to El Calafate, the gateway to Los Glaciares National Park. Experience the feeling of being at the end of the world. Four-night stay at Eolo Relais & Chateaux. Experience a natural show at Lago Argentino and its Andean glaciers: Upsala, Spegazzini, Onelli, and Mayo. You may also spot black swans and flamingos on the horizon.

The itinerary includes a private tour of the Perito Moreno Glacier with a guide. The immense 200ft tall glacier stretches for three miles along the Lago Argentino. As you traverse the forest, you'll walk across various footbridges offering astounding views of the glacier. You'll also spend a day cruising aboard a catamaran on Lago Argentino, which is home large Andean glaciers. You'll cruise among the icebergs to the largest one of all, Upsala. You'll then head back to shore for a walk to Los Perros Waterfall, from where there is a magnificent view of the Rio Caterina Valley.

Transfer to the airport and flight to Buenos Aires. It's then off to San Antonio de Areco to settle in at the La Bamba de Areco ranch. You'll quickly find your feet in the property, where the pace of life has so much appeal. Men come and go with their horses, which adds to the warm and free atmosphere - the true spirit of the Pampas.

San Antonio de Areco has really preserved the gaucho spirit. This can be seen in a visit to the Ricardo Guiraldes museum, the author of 'Dom Segundo Sombra', the pinnacle of gaucho literature. Whether it's riding or sitting in horse-drawn carriage rides, horses are essential to the way of life of local people and their guests. You simply have to listen to stories about the traditions of the land, mate (a caffeine heavy hot drink) calabash bowl in hand; to get a lesson on how to use bolas (a type of throwing weapon made of weights on the ends of interconnected cords), a lasso or a facon, a large knife which is also used for cooking. You may even see a singing contest between payadores (itinerant singers).

From the streets and shady bars to the largest stages in the world, tango has come a long way. It is still danced on the sidewalks of San Telmo or La Boca, but its choreography has also changed dramatically, which has made it all the more impressive. The brilliant staging, the musicians and the dancers (who are fully engaged when they play 'at home'), the great food: it all combines to make this show a model of its kind and an absolute must for visitors to Buenos Aires.
Option - A dinner and show

Visit Chile's Torres del Paine National Park, a UNESCO World Heritage site boasting stunning landscapes, which is typical of the Magallanes and Última Esperanza provinces in the south. It feels like this is where the world ends. The National Geographic ranked the park as the world's fifth most beautiful place.
Option - Four days and three nights leaving from El Calafate.

Dependent on season, accommodation and activities
The estimated cost for this trip is £6,200 to £7,800 per person. The final cost of the trip depends on the way we tailor it especially for you. The final cost varies according to several factors, which include the level of service, length of trip and advance booking time. The exact price will be provided on your personalised quote. The average price for this trip is £8600 per person.
A few of the benefits of travelling with us

Get in touch
Our experts have the inside track on the destinations they sell and will tailor-make a holiday to your unique requirements.
START PLANNING YOUR HOLIDAY
Contact one of our Argentina specialists
+ 44 (0) 20 3958 6120 Start Planning Your Holiday