When planning a holiday - particularly a safari - it can be difficult to know how the different regions within a country vary. Sure you've settled on Tanzania, but now you've got to decide whether you want to explore the northern Ngorongoro or the southern Serengeti, oh and what about those other off the beaten track parks and reserves you've heard are secretly the best? Or should you simply combine them all? It's a minefield, really. Well that's where we come in...

The town of Arusha, the gateway to northern Tanzania, is located at the base of Mount Meru and looks out to Africa's highest peak, Mount Kilimanjaro. We wouldn't suggest more than a stopover in Arusha but there is plenty to do here. The area is known for its historic and numerous coffee plantations, and we recommend taking a tour of one of the coffee estates to see the process from bean to cup. If there's time, a trip to Shanga, a fantastic social enterprise in the city, is also well worth a visit. Combining artistic flare and social development, Shanga employs people with disabilities to make unique glassware and jewellery which can then be bought as lovely souvenirs.

Tarangire National Park is one of those secret gems you've probably never heard of; think perennially pretty rolling savannahs dotted with termite mounds and majestic baobabs. In the summer months, elephant herds can be found in their hundreds here and the diversity of plains game is wide; from giraffes to elands, impalas to zebras and even lions and leopards. Two focal points you should tick off in this region of Tanzania are the Silale Swamp and the Tarangire River, where game congregates in huge numbers. Birdwatchers will also be in their element with over 550 species found in the park.

The three-million-year-old Ngorongoro Crater is the largest unbroken caldera in the world. Much more than a volcanic crater though, this UNESCO World Heritage Site is also home to a huge array of wildlife, all roaming across the 12-mile-wide crater floor. Some of the most likely candidates to spot are elephants, buffalos, giraffes, black-maned lions, and even endangered black rhinos. Higher up on the crater rim the region is also a heartland for the Maasai people. As you drive up to the top of the crater, and your lodge, your much more likely to see a Maasai shepherd and his sheep than lions or elephants. So while here, pair your safari with some exploration of the remote villages, padi fields and banana plantations to get a real sense of rural Tanzanian life.

Where to Stay: The Highlands, Entamanu Ngorongoro, Gibbs Farm

The Serengeti really needs no introduction. The endless open plains are populated by all of the Big Five and every year (between June and September) it plays hosts to the Great Migration of millions of wildebeest. Outside of the migration months the park is no less dramatic and, in fact, these less busy times of year can produce some of the best wildlife sightings, especially of big cats. We work with a range of camps and lodges in and around the park and can recommend which region and which time of year is best suited to what you want to get out of your Tanzanian safari.

Despite being another relatively secret safari destination, the mighty Selous Game Reserve is actually the largest game reserve in Africa. Its size lends itself to a huge diversity of landscapes, from volcanic springs to untamed jungle and football-pitch-deep gorges. When it comes to wildlife the reserve offers just as much variety; you might spot endangered wild dogs darting across the savannah plains, giraffes nibbling from the jungle trees, elephants and hippos along the banks of the Rufiji River, and lions using the reserve's natural hiding places to chase prey in broad daylight. Since the Selous is a game reserve rather than a national park there are fewer restrictions on activities here too and we can arrange everything from water-based safaris and fishing excursions to walking safaris and fly-camping trips.

It might not be the most famous but Ruaha National Park is Tanzania's largest. Tucked away among the central highlands, the park is still relatively unexplored and remains something of an untamed wilderness, with a huge diversity of beasties including one of the largest populations of elephant in Africa. During the dry season the park becomes very arid and, with few other water sources, the Ruaha River is a real focal point for game viewing. Away from the river the dry open hillsides force antelope and buffalo to gather into large herds to defend themselves from predatory lions, while leopards, zebra and giraffe can all also be spotted in large numbers. Wild dog sightings have grown in recent years too, making this one of the last refuges for this endangered species.

Tanzania's western Mahale Mountains are home to the largest group of habituated wild chimpanzees in the world. Rising up from the sandy shores of Lake Tanganyika the mountains are dense and lush with river valleys and waterfalls winding through the forested landscape. Trek through the mountains with a dedicated guide and enjoy the extraordinary experience of watching our closest cousins in their natural habitat.

Where to Stay: Greystoke Mahale

Thinking about your own Tanzanian safari adventure ? Get in touch with the team today.

Through a Q&A with Original Travel, Alex Walker shares his experience and knowledge[...] 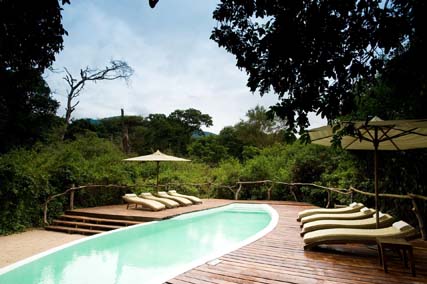 Our accomodation recommendations for your Western Tanzania holiday. Greystoke[...]