Armenia has a distinctly biblical feel, and an astonishing number of monasteries. As a result, holidays to the country are historically and religiously enlightening. Find out more...

Standing in the shadow of Khor Virap

This morning I stood in the shadow of the fourth century monastery of Khor Virap on the lesser slopes of Mount Ararat holding a dove in my hand. It really wouldn't have surprised me if Noah had suddenly stepped into the sunshine leading a trail of animals and beckoned me towards the Ark.

This country has a distinctly biblical feel and an astonishing number of monasteries, many dating back to the fourth century. Khor Virap is perhaps one of the most picturesque, given its location so close to Ararat and the border with Turkey, Iran and Azerbaijan. It is an easy 45-minute drive south of the capital Yerevan and into the vast and sparsely populated countryside, where the monastery sits atop a little hill, surrounded by green pastures that bloom with poppies and fig trees in the summer. Storks perch in huge nests precariously balanced on telegraph poles and people plough the fields and maintain the upkeep of the church including one magnificently moustachioed man whom I managed to sneak a photo of.

Many pilgrims journey to this church, which is well known for its most famous Saint: Gregory the Illuminator. He was credited with converting Armenia from paganism to Christianity in 301AD - but not before he was imprisoned in a dungeon for 13 years by King Tiridates III. He survived on a meagre supply of bread and water, and you can climb down the very steep steps that line the wall into this darkened chamber to get a feel of what it must have been like. Pretty grim.

Travelling further south east, the road starts to climb and we pass stalls of wine being sold by elderly weather beaten women and men. We stopped at a winery to taste sweet apricot, cherry and pomegranate wine before continuing the journey to where the road suddenly plunged into a narrow gorge with impressive redbrick mountains either side, dotted with caves and the river Darichay gushing alongside us.

The road eventually winds its way up to yet another spectacular monastery - that of Norovank from the 13th Century. The church is the masterpiece of a very talented Armenian sculptor and miniaturist called Momik, and his delicate crosses are beautifully inscribed into the walls. The surrounding hills are peppered with 'khachkars' or tombstones, which are designed with intricate and ornate patterns of crosses. Having explored the church we made our way back down the hill to a little cave, accessed by a tiny wooden bridge where some entrepreneurial Armenians had set up a restaurant. We ate a hearty meal of dolmas (tightly wrapped meat, rice and tomatoes in vine leaves), curds, goats cheese, pickles and herbs with levansh all washed down with a noggin of apricot grappa or two.

For more information on tailor made travel to Armenia, contact Original Travel. 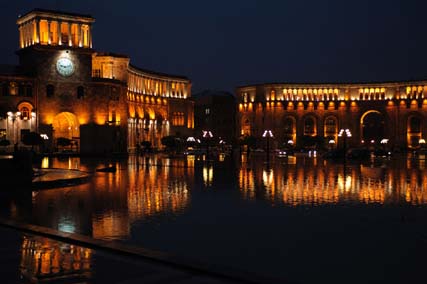 Armenia is a civilisation so rich in history, culture and religion - and now is the time to visit[...]