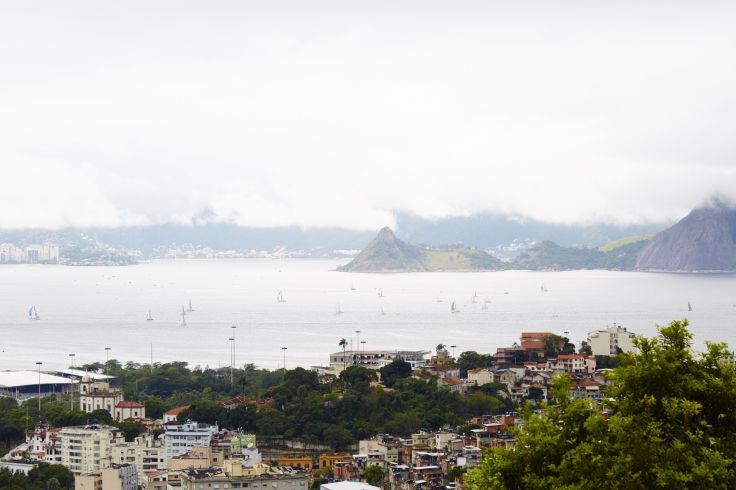 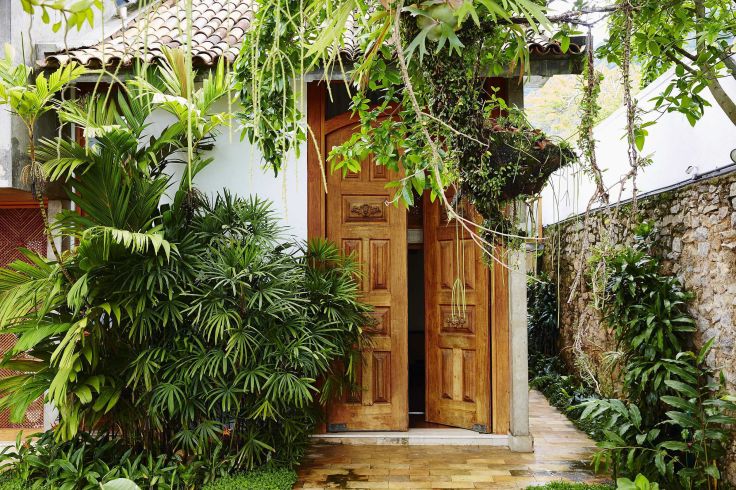 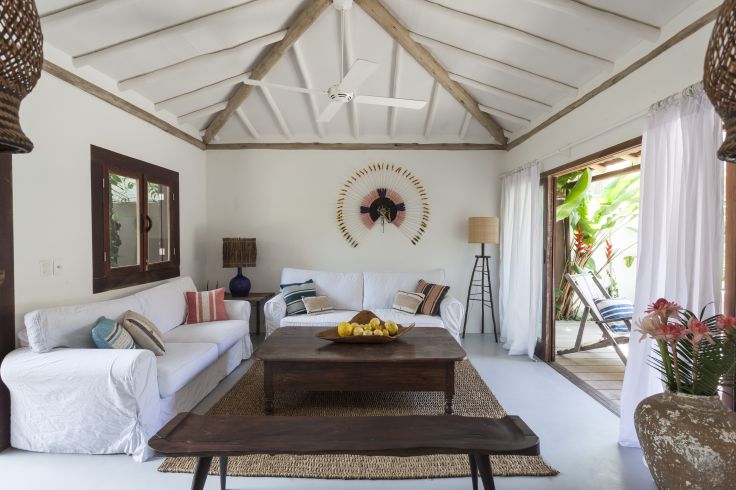 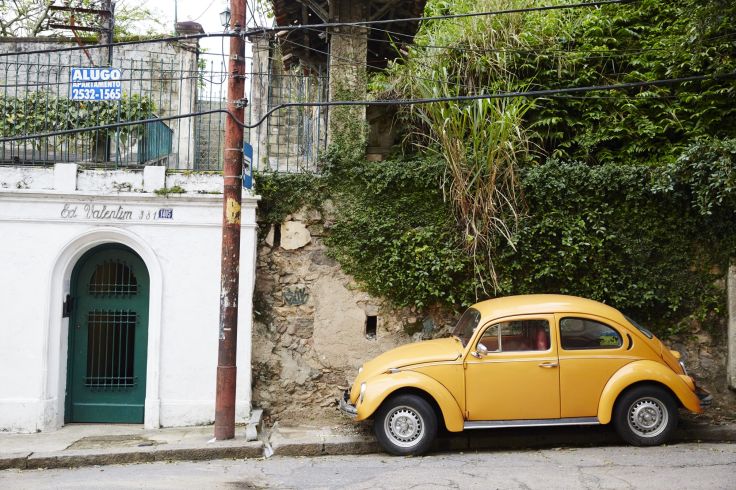 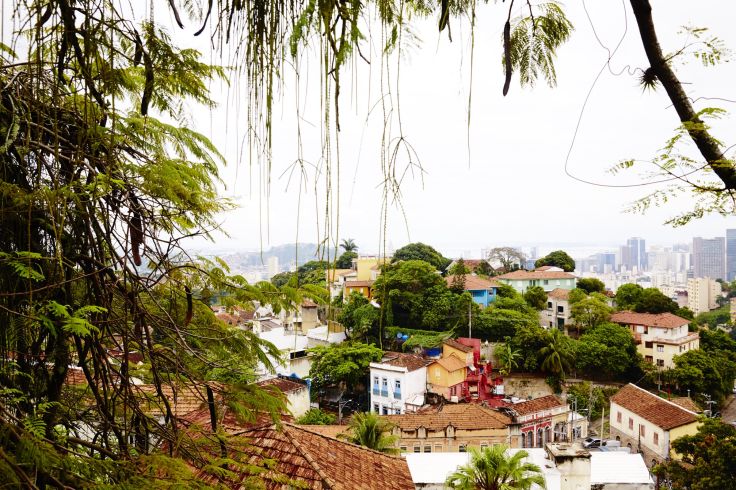 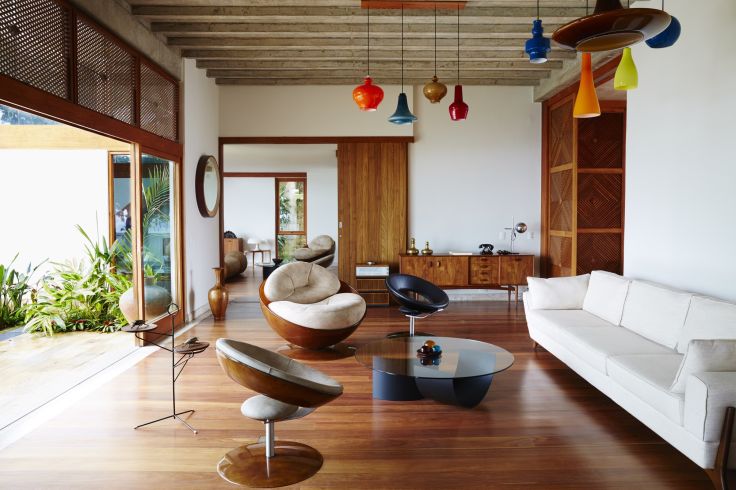 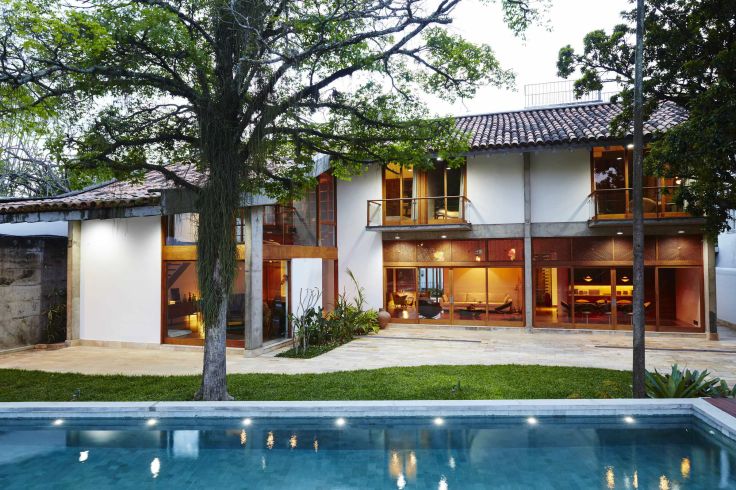 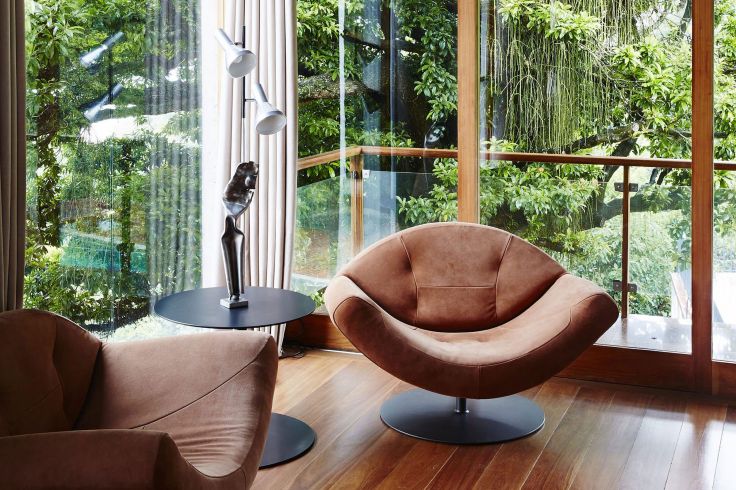 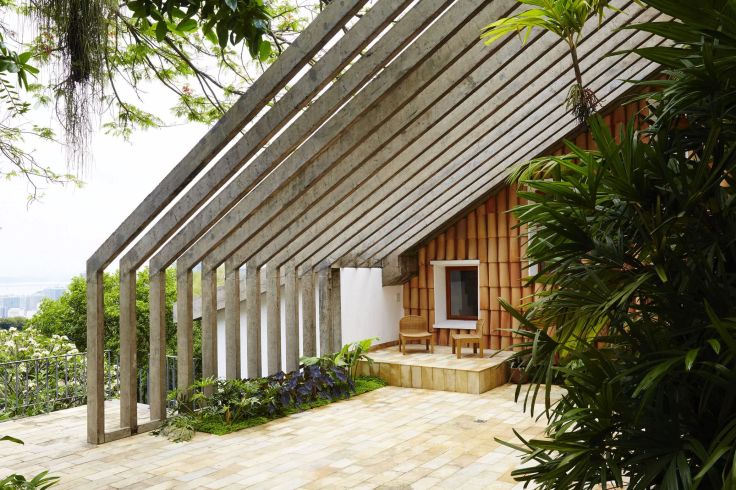 Your journey begins in Salvador (full name is Sao Salvador de Bahia de Todos los Santos) Brazil's first capital, an almost African city marked by late Baroque gold, which fuses sub-Saharan and Portuguese cultures, combining music and beliefs. The Pelourinho district, interlaced with steep alleyways, winding streets and palm fronds, reveals the splendour of the vast houses which line up displaying their pink, blue or ochre facades. Here, in this town where Gilberto Gil and Caetano Veloso started out, the pace of life is dictated by the rhythm of the bossa nova. A flight to Trancoso, 435 miles south of Salvador. Over the space of a few years this former fishing village has become an Eden for the happy few and for travellers who appreciate its aesthetics.
From Robert de Niro to Bill Gates, from Naomi Campbell to Scarlett Johansson: all fell in love with this typical Bahia village which, 30 years ago, existed without water or electricity. But you don't come here to be seen, you come here to get away from it all. A very boho atmosphere prevails in the Quadrado with its vivid facades; the leafy promenade that sets the pace for the village. While the village barely stirs at siesta time, the pace might accelerate in the late afternoon around an improvised football match in front of the small white church, erected by the Jesuits. Then the sound of the bossa nova rises and lamps start to illuminate the terraces: Trancoso is in full swing. But the real treasures of Trancoso are its beaches, emerald jewels at the foot of the ochre cliff, in the shadow of the jungle. Another flight, again to the south, and you reach Rio de Janeiro, to stay on the Santa Teresa side, where nobility and Portuguese administration settled when Rio became capital, leaving the people to the sea and the epidemics in what was once swampy land below. The ambassadors left the hill for Brasilia in 1960, leaving space for directors, composers, writers and painters: Santa Teresa has been an artists' haven for 15 years. We love its bohemian character, its terraces in the shade of banana trees, its houses with European splendour and its gourmet restaurants.


In Salvador - Villa Bahia. If the soul of Brazil is found in Salvador, the heart of Salvador beats at Villa Bahia. Nestled in Pelourinho, our favourite hotel here embodies Bahia's entire history. A haven of tranquillity, it's an ideal base for exploring the city. Sao Francisco, the city's most beautiful Baroque church, is within walking distance. In the house, created from two adjoining 17th-century pousadas, the 17 rooms recall the old markets and stopping points that led the Portuguese to Bahia. The colours are bright and there is period furniture. A wooden elevator painted and decorated with birds leads to the terrace. There are wooden loungers, whirlpool baths and panoramic views of El Salvador.
In Trancoso - Stay in an old fisherman's house, an alternative for independent and aesthetic travellers. Your private home offers comfort, luxury and independence. The furniture is made by local artisans and smaller items are signed by the best Brazilian or Colombian designers. The private patio is a haven of peace.
In Rio - A family home built in the 1920s, in the heart of an estate of several acres of rainforest, eucalyptus, and centuries-old mango trees. From the pool, a magnificent view of Rio, Sugarloaf Mountain and the bay. Sheltered from the hubbub of the city, experience a different Rio, away from the beach, away from modern-day hustle and bustle, another Rio altogether.

Private transfer to the heart of Pelourinho and three-night stay at Villa Bahia, which combines two colonial-era houses into a discreetly sophisticated hotel. The rooms' furniture and colour palette evoke colonial Portuguese culture, while remaining unmistakenly Brazilian. In the restaurant, its talented chef brings together cuisine from both sides of the Atlantic, France and Brazil. There are two cool patios where you can relax with a caipirinha. You can fully unwind in the pool, a luxury in this district. From the terrace, a delightful panorama of the rooftops and bell towers of the Old Town. In the morning, when you open the windows overlooking Sao Francisco and the colourful walls of the ancient houses bordering the square, and an Angolan samba melody reaches your ears, you know you're in the spiritual heart of Brazil.

Founded in 1549, Sao Salvador da Bahia de Todos os Santos (to give the city its full name) was Brazil's first capital. It is divided into two parts: the upper town and the lower town. The lower town runs along the gulf, incuding the harbour, the Mercado Modelo (the old customs building) and the Cathedral of the Transfiguration. And also the beautiful houses at the base of the mountain; narrow, steeply sloping streets with glazed painted tiled facades, narrow staircases, the small bars of the old quarter of Ribeira. Huge elevators - the Lacerda and the Tabuao - and funiculars connect the lower town to the upper town, where, on the hillside, the criss-crossing steep streets of the Pelourinho district are found. Large houses with pink, blue or ochre facades and jacaranda parquet floors; and Baroque masterpieces: the cathedral, the Sao Francisco Church, the largest Jesuit church in the country, completed in 1723. And everywhere, candomble (religious rites) squares and casas-de-santo (informal shrines) where orishas (minor deities) are worshipped.
Things to see and do - Stroll through the streets of Pelourinho to experience the Bahia pace of life - try capoeira - taste the pleasures of a tropical beachside swim - visit the Vila Velha Theatre, one of the most beautiful places in Bahia, where Caetano Veloso, Maria Bethania, and Gilberto Gil started out in the 1960s - lunch on acarajes, 'fireballs', white bean and shrimp fritters fried in palm oil, part of Brazil's intangible heritage, bought from a Bahia woman dressed in white lace - attend a candomble religious ceremony in a Catholic church - sip a cachaca, sugar cane brandy.
Included in the itinerary - A half-day walk through your neighbourhood, Pelourinho, with a private guide, to discover its history and meet its community of artists, stylists and musicians. Move from Baroque churches to artists' workshops and forge ties along the way.

Three full days to settle down, make yourself at home in this private house and relax. You will find yourself naturally adopting the enchanting pace of life in Trancoso, lazing on the terrace or on the beach, with time to explore and be together.
Things to see and do - a nap during the warmest hours: an institution - improvise a game of football with the locals, in front of the old white church - sip a chilled caipirinha on the terrace, under the lamps, at dusk - enjoy a moqueca, a Bahian marinated fish speciality - choose your beach for the day: white or red sand, turquoise or emerald water, bordered by a lush jungle or an ochre cliff - learn to do capoeira accompanied by live music - dance the forro into the early hours - stroll through shops and art galleries displaying the creations of local artists - put on a mask, flippers and snorkel to visit coral reefs.
Optional - Horse riding on the beach: a stunning setting and an incredible sense of freedom.

Private airport transfer and further flight south to Rio. Another private transfer to the district of Santa Teresa, set on its hill, a true refuge for artists in Rio. We love Santa Teresa's bohemian character, its terraces in the shade of banana trees, its houses with European splendour, its coveted restaurants... You stay for three nights in a beautiful family home built in the 1920s, offering seven large rooms in the heart of an estate of several acres of lush rainforest, eucalyptus and centuries-old mango trees. From the pool, a magnificent view of Rio, Sugarloaf Mountain and the bay. A tennis courts and coach are available.

Think: the Sugarloaf Mountain, the statue of Christ the Redeemer with arms spread wide on the Corcovado promontory, facing the most beautiful bay in the world. Rio means football, bossa nova, bikinis… and rainforest vegetation.
Things to see and do - Visit the Museu de Arte Moderna, built in 1960 by Alfonso Eduardo Reidy, for its perfect architecture - shop for a bikini at Bumbum - chill on Ipanema - observe trends in contemporary art at the Anita Schwartz gallery - see the Maracana Stadium and the huge concrete cone of Sao Sebastiao Cathedral, Rio's twin temples - indulge in churrasco (grilled meat) and feijoada (black bean and meat stew) - go shopping in the bohemian district of Lapa: Portuguese houses in faded colours reinvented as second-hand clothes shops, vintage shops and antique galleries, where splendid mid-century Brazilian furniture is the order of the day - sip Amazonian fruit juice in the cool of a rear courtyard in Leblon, after an afternoon's shopping.
Included in the itinerary - The private beach tour of Rio. After taking your bearings of the city from the top of Corcovado, which overlooks Sugarloaf Mountain and the whole bay, go from beach to beach, Copacabana, Arpoador, Ipanema, to sample the Rio lifestyle where everything feels like a celebration. And after the beach, you have an appointment with a Rio resident who takes you to discover their favourite bars, to experience Rio by night, and spend your remaining energy on Ipanema rooftops, trendy bars in Leblon, electro bars in the alternative district of Botafogo ('BotaSoho') or samba clubs in Lapa, the bohemian heart of Rio.

BEACHES OF TRANCOSO ON HORSEBACK


You can make your way, on horseback, across the long, deserted sandy beaches south of Trancoso, taking in Rio Verde, Itapororoca and Itaquena. This two-hour excursion with a private instructor includes the hire of equipment.
Optional

Dependent on season, accommodation and activities
The estimated cost for this trip is £5,900 to £6,400 per person. and the final cost of the trip depends on the way we tailor it especially for you. The final cost will vary according to several factors, including the level of service, length of trip and advance booking time. The exact price will be provided on your personalised quote. The average price for this trip is £6200 per person.
A few of the benefits of travelling with us 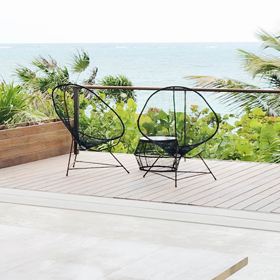 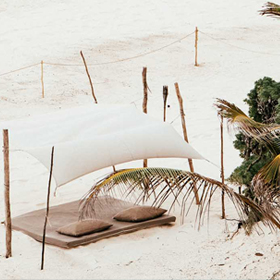